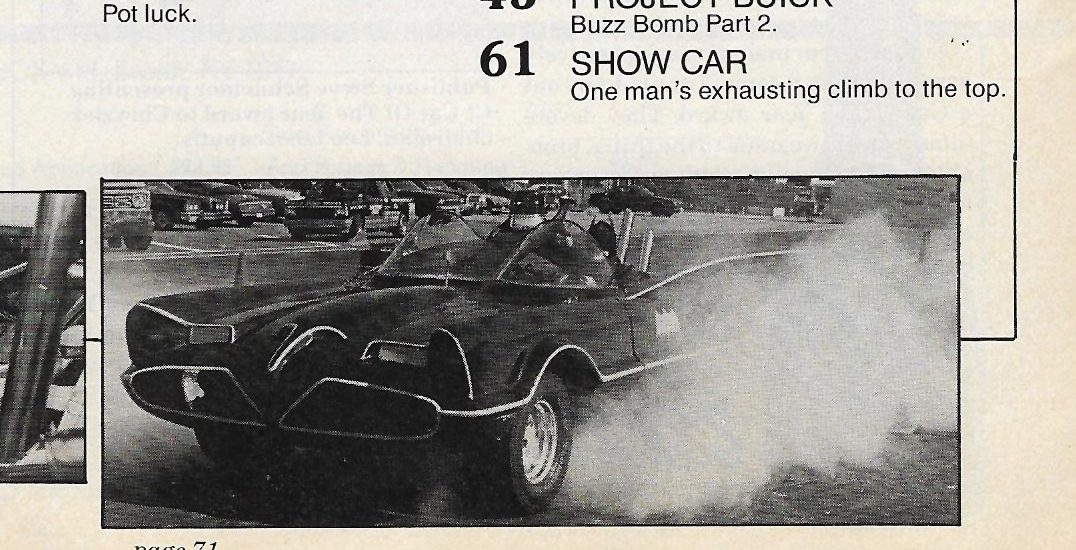 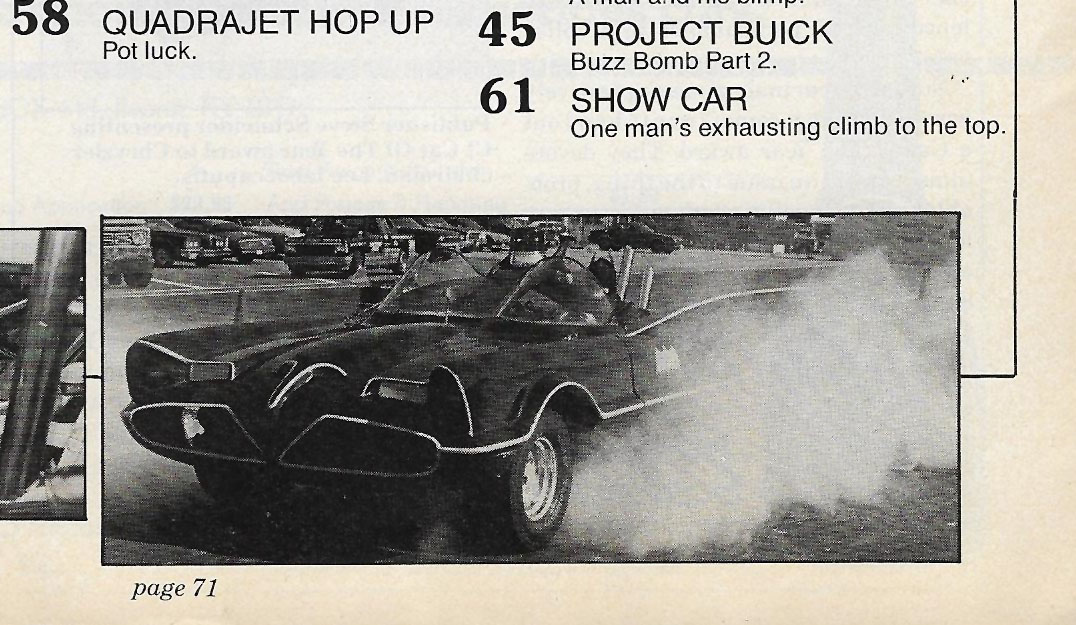 Uh..yeah, forget that.  There were no atomic batteries, or turbines..or any thing that resembled speed.  The promise of those things vanished when we found that the Batmobile we had procured to Drag Test for Cars Illustrated Magazine was actually motivated by a very tired, wheezy, oil burning 289 two barrel.  The tiny Ford had been plucked from a junkyard Falcon to replace the ever-so-slightly more impressive 460 that powered it out of the Batcave, 20 years earlier.

The novelty didn’t last long with this thing.  We had dreams of wringing out an actual TV star on the Englishtown quarter mile.  Our reality was how to make a story out of what amounted to nearly 6000 pounds of Bondo covered chicken wire resting on a stock Lincoln chassis, featuring a total void in the place where horsepower should have been.  It was ugly…as was the car itself!

The damn thing looked impressive as hell from 20 feet away, but when you got up close…or worse, inside of it, the Batmobile revealed itself to be a supreme exercise in shoddy workmanship and tacky detail.  Cheap plastic doodads and fake switches festooned the interior…the exterior wasn’t much better.  Deep fissures in the six inch thick bondo ran from here to there, and it was apparent that the shiny black paint covered a surface that had been block sanded with a potato.

Ten minutes in, I wanted to bail on the mission, but the rest of the crew was determined to get a story come hell or high water.  Out voted, I just hung back out of the way and let the other guys have their fun.  We had rented a Batman outfit for me to drive the car in, but instead Jim Koscs donned it and jumped behind the wheel.  Jim was having a blast, living out a childhood fantasy while wheeling the car around for static and drive-by shots..many of which were unusable because of the blue cloud that followed the Batmobile everywhere it went.

We had come to the track that day with a couple of our own photographers, but before long there were a dozen of the tracks regular photogs shooting alongside them…and of course, everybody wanted a burnout shot.  HA!…nnnnneeeevvver gonna happen..nope, ferget it.  The collective command was given for Jim to smoke the tires.  Undaunted, our Caped Crusader rolled the Batmobile into the waterbox and proceeded to powerbrake for what seemed like an eternity, and he got nothing, zilch. Not a tire squeak, not a hint of body rise, nothing but oil smoke and severe pinging.  It just sat there wailing like a wounded bison, as Jim became more and more frustrated.

Of course, I tried all the usual ways at first.  Just a simple brake stand…then a brake stand with progressive throttle…then one with light brake and modulated throttle….then the slow rolling brake bump with full throttle… none of it worked.

With that, we took a brief stop in Neutral Drop land, which would have been successful had we been dealing with anything other than a 1960’s Ford.  The valving system in FoMoCo transmissions of the era didn’t allow gear engagement at anything much higher than cold idle.  At this point, lifters are ticking, the oil pressure gauge is reading like 3 lbs at idle and steam is starting to seep from the Bat Grill…I don’t fucking care.  We move into a more sophisticated strategy.  We now go for the reverse roll, J Hook style forward low rpm neutral drop…and it works!..kinda.  I get the wheels to actually lose their grip for an instant.  A half dozen more attempts and the Batmobile is smelling like it’s gonna burst into Bat Flames, but we press on.   Finally, I position the car so that the J Hook action is going to land on what I calculated to to be the slipperiest part of the water box.  I know the Bat Pig has just one more serious attempt in her, and this is it.   I note my spot..roll backwards towards it with just a little extra speed.  As I close in, I slip her into neutral and bring up the RPM to as high as that God forsaken valve body will allow. On the spot, I pull the shifter down into low, and as I feel the gear hit, I stand on the gas and just gently lean into the brake…success!!  I’ve got a tire spinning…sloooowly, but it’s spinning!  Not nearly fast enough to make any smoke…but spinning none the less.  Engine screaming in pain, I sit there for at least a minute gently nudging the brake, nurturing my precious kernel of friction.  Just as the pinging becomes steady and pronounced, I begin to smell the faint waft of tire smoke over the pungent stink of old antifreeze and burning K Mart econo grade engine oil.  I am melting Bat Rubber, and as the photogs click away…in slow motion, as if in a Fellini film…I am Bat Burnout Lord and Master..and everything is perfect in the universe…Amen.

It flat died as soon as I took my Bat Foot out of it….