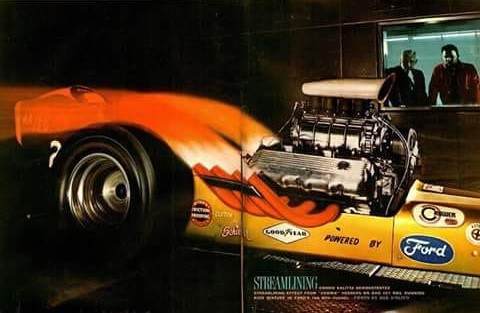 The Legendary Diamond of Poop Mountain

The Cammer was the ultimate solution to the problem nobody was having.
It was developed for NASCAR where the pushrod engines of the day were singing along at 7000 RPM for 500 miles at a clip, using basic valvetrains that were essentially identical to the ones in engines sold off the showroom floor.
In a stroke of inspirational genius, Ford engineers decided to adapt Hemi heads to their FE wedge block (more on that in a minute)…then, because Ford engineers are known for taking simple things and complicating them in ways no rational person could fathom, they added an overhead cam to each head…thus eliminating the pushrods nobody was having any problems with.
The only trade off? A six foot long timing chain that would stretch, flex, twist and contort enough through the entire RPM range so that accurate and consistent cam timing would be an impossibility.
In an act that was probably the biggest favor ever done for an auto maker by any sanctioning body, NASCAR banned overhead cam engines, thus saving FoMoCo racers untold cost and frustration in trying to sort these things out.
So what does Ford do with their stock of suddenly obsolete SOHC engines? Dumps them on unsuspecting Drag Racers with offers too good to pass up.
And this is where the Cammers real weakness shined like a diamond stuck in the side of poop mountain…the FE block.
To know the FE is to hate the FE. The oiling system is something you can’t describe to someone who has never encountered it, without them thinking you’re telling a joke. It literally oils the main bearings through gaps, gouged into the block behind the cam bearings.
The oil holes that reach from the bottom of the cam bearings to the mains are tiny diameter, and actually drilled into the block in such a way that they don’t quite line up with the oil holes in the bearings.
Ford addressed this by adding a giant oil passage to the side of the block for racing engines, but that did nothing to address the main problem Drag Racers were having with them.
Even with cross bolted main bearing caps, and every support and modification racers could dream up, the FE’s undersized main webs gave the block the structural integrity of a potato chip. Under a good load, with some traction, the Cammer would literally throw chunks of its reciprocating assembly down into the strip with a fury unmatched by any other engine seriously considered for use on Nitro.
Racers like Don Prudhomme and Connie Kalitta blew through their Cammer inventory quickly and returned to Chrysler power, and like FOMOCO itself tried to pretend the debacle never happened.
Kalitta had more success than most with the engine, and he summed up his experience in three words…”It Was Shit”
But, it did look good, and it was rare and exotic. The Cammer proved to the automotive world that those are not necessarily good qualities.
…and then, there was the Boss 9…..