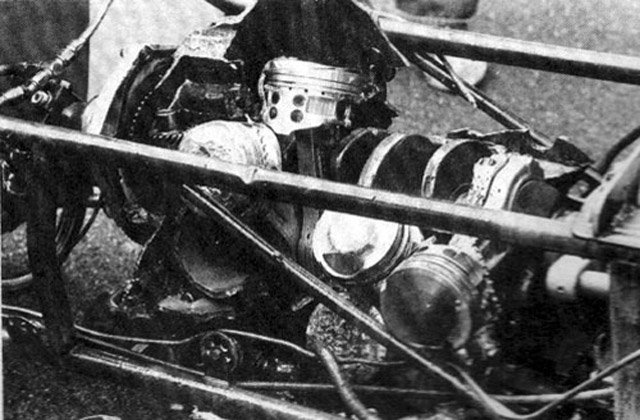 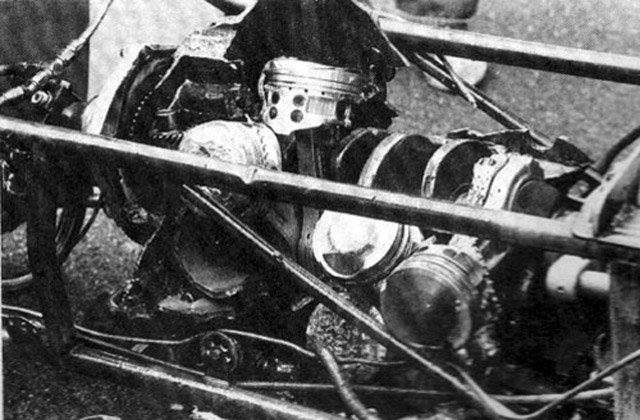 This is a quick story we did about ten years ago, and it’s been making rounds on the internet ever since. Published here, in case you haven’t seen it.

This was a common scene for engines that ran on hydrazine.
It’s the liquid so potent, so deadly, so illegal that those in Drag Racing who have unleashed its wrath dare not speak its name in public. In the pits, even to this day, it’s known simply as H. Hydrazine has been around, and used as an “exciter” for nitromethane for as long as we’ve had Drag Racing. Actually, its use as a racing fuel predates even the Dry Lakes. Hydrazine is rumored to have been used by the Nazi’s as an additive in the Mercedes Formula 1 cars of the pre war era.
Here’s the basics of how it works. Nitromethane is a mono-propellant that carries its own oxygen supply. Hydrazine is an oxygen scavenging agent. When you combine the two…even with just a tiny percent of H in the mixture, you get an unstable fuel that is at war with itself. Insanely dangerous, yes…but internal combustion nirvana of the highest order is a guaranteed result.
Lakes era racers who experimented with H found that a stock 90 horsepower flathead would pump out better than 300 horsepower simply by sucking this stuff through its Stromberg. These same racers also discovered Hydrazine’s major drawback for practical use. After running it through an engine, the carbs would start to cake up with a substance that resembled soap flakes. This nasty little by product was a shock sensitive explosive called the Methazodic Salt of Hydrazinium Acid, and was the result of allowing vapors from the Nitro/Hydrazine mixture to condense in a closed environment. Right, never mind this stuff will throw your crank on the ground after just a couple of runs, but if you happen to tap the carb with a wrench, it’ll blow your face off. Let’s go racing!
Hydrazine had its big moment in the sun back in 1960, during the height of the NHRA fuel ban. Barnstorming Top Fuel racers were all clustered together in the 180 mph range, when out of the blue, at a small track in Alton Illinois, the Greek shoved a big gulp of H down the throat of his Chrysler and ripped off an unheard of 204 MPH pass, boiling the hides and wheelstanding right through the lights.
The Ramchargers were known for experimenting with all sorts of fuel, including hydrazine
Several years later, during the dawn of the Funny Car era, many injected cars were known to brew up a batch in order to keep up with blown Fuelers. Shotgun like exhaust notes, bright green header flames and crewmen frantically draining fuel tanks in the shutdown area were telltale signs that H was in the house.
Even though Hydrazine has been on perma-ban by every sanctioning body that has ever existed, its use in times of extremely tight competition, or when a barrier is on the verge of being broken has continued right up to the modern era. We can remember one nighttime qualifying session back when the 300 mph barrier was about to fall in Funny Car, when one of the cars in contention for the honor made a lap with those freakish header flames dancing up over its roof. It was so obvious that a sudden buzz amongst educated onlookers erupted. Even the announcer that night took note of the unusual site. Officially, it was played off as burning copper from a failed head gasket…but then, the very next pair of cars, there it was again. Eight bright green candles lighting up the nighttime sky, and yet another barrier crushed. Was it really hydrazine at work? Only the guys mixing the fuel that night know for sure.
Yeah, it’s dangerous stuff. Handled improperly hydrazine will kill you in ways you can’t even spell, but its a glorious part of the history and heritage of the thing we call Fuel racing.